The Meeting : A Froggy Fishpond Fable 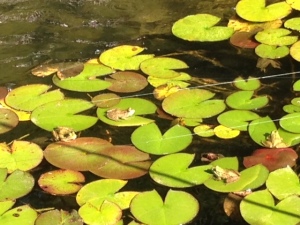 Filbert called the meeting to order and began with the sad news that one of the oldest members of the FFF was no longer among them.   Francisco Frog had perished in the jaws of Garth Gartersnake in the last week.

Hearing the news , Felix Frog ( top right of photo) turned to flee causing Forrest Frog (top center of photo) to get ready to run ( we all know that Forrest can run).

Finian Frog (bottom right of photo) seemed to be the only one paying attention.

Filbert continued by warning the members to be aware of their surroundings and watch out for any slithering, swimming snakes.

All the while, Garth Gartersnake watched from his hiding place behind the waterfall.    He and Gertrude Gartersnake were waiting for the sun to warm the ground before they headed out to the Lily Pad Buffet for breakfast.   He turned to tell Gertie about the bountiful buffet awaiting them.   Turning back he saw  ……….nothing.

His buffet had been a movable feast and was gone.

He told himself there would be another day for a buffet.  He decided not to tell Gertie, afraid she might think he looked tasty enough.   She would just have to discover the empty Lily Pad Buffet on her own.

At the bottom of the pond, Filbert adjourned the meeting.   Felix had already flown, Forrest had run and Finian was busy burrowing in the mud.    Filbert shook his head and swam away looking left and right for any slithering, swimming snakes.

The moral of the story?  Alliteration is a bitch.