Big is relative in the RV world and this one isn’t huge.  It is only 36 feet long, really a gherkin in a world of giant dills. 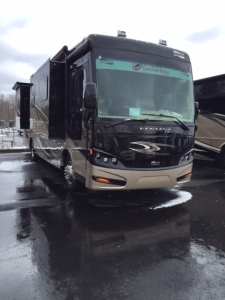 We are in serious “plan for retirement” mode.   In three years (or less depending on just how much work frustration the next three years brings) we will pack up our desks for the last time and head home. A thought both scary  and exhilarating.

Dave has been ready for some time to scale back and down-size our life. It took me longer to get my mind wrapped around the change but I believe I am there now.

Down-size. In our case meaning “get rid of all that crap you’ve accumulated in the last 41 years”and “stop holding on to the things you thought mattered but really don’t”.  A huge job that will probably take the next three years.  Sell the too large for two people house and learn to live in something smaller.

We can finally see the end of this part of the journey.

But let’s talk about the RV.     Dave has always been the camping type. He doesn’t mind sleeping in a tent, peeing on a tree and generally roughing it.

I like a bed and a bathroom. Compromise for us is an RV.

The bonus is that in the next 3 years we can travel and decide where we want to live full time. After we retire we can travel to see the family we have scattered all over the United States. We can travel with the 3 dogs. We can go where and when we want.

My adult children swear they can’t see me in an RV .  Dave calls me The Princess and The Pea.   I have no earthly idea why.   No, really I don’t (fine, I’ll write more about that later on) .   I believe the joke is that if something would happen to Dave while we were on the road that the boys would have to mount a rescue operation for their mother.

I’m going to show them. I’m going to learn to drive the thing. Really how hard can it be to drive? It is just 5 times longer than a car. I’ll just use those air horns to let everyone know to get the hell out of my way.

My plan is to blog the RV experience in words and pictures.  Two adults and three dogs hurtling down the road in a house on wheels.   What could possibly go wrong?

Stay tuned. First major trip coming up in June. We’ll spend a month in California waiting on the birth of our first granddaughter.

How do you spell the sound an air horn makes?   Beep?  Honk?  Ahhoooogahhhhh?