Blame it on the Dog

For the last week, the dogs and I have been batching it.    “Get me outta here, I need a vacation” Dave was off doing freezy things in Montana ( ice fishing, snowmobiling, other freezy type things you do when the temperature is 0 degrees).

The first night he was gone I got the dogs settled in the master bedroom and right as I drifted off to sleep Dallas heard a bird fart somewhere in Arizona and started barking.  His barking got the other two started, and then I was wide awake because I needed to make sure that bird wasn’t breaking into our house.

Several hours later I managed to fall back to sleep.    What seemed like five minutes later I rolled over and had that strange sensation that someone was staring at me.   I opened one eye.    5 inches from my face were four eyes staring back at me.  Four eyes that were attached to two dog heads resting on the edge of the bed.

“YOU OPENED YOUR EYE! TIME TO GET UP! GOTTA EAT!”

The clock said 5 am.  The minute I lifted my head to check the clock the third dog joined the other two and I knew I was up for the day.

Each morning I managed to hold them off a little bit longer.  This morning, our last day alone, they stayed asleep until 6:45 am.

Here’s the deal.  The dogs told me that it is Dave who gets up early and hey if someone is up they might as well eat. Right?     Dave blames the dogs.   He can’t sleep in because they want to get up.     Someone isn’t telling the truth.

Welcome home honey.  The dogs ratted you out. 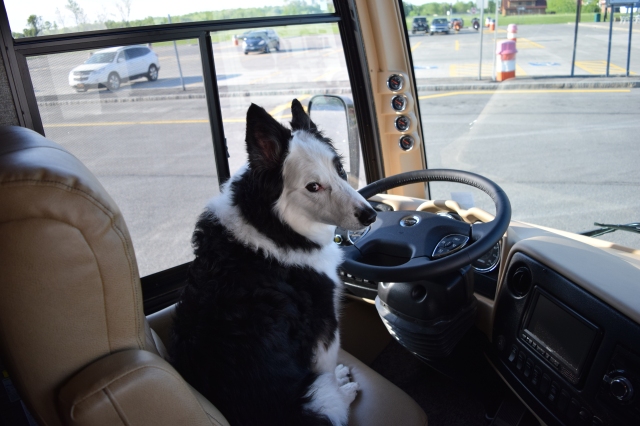 Tara in the drivers seat.   The look says it all.  You can’t trust her with your secrets.