Superstition or Faith? -Saint Joseph of Our Sacred Pansy.

Let me preface with the disclaimer that this post is not intended to be sacrilegious. As with many of my posts, you have to bring your sense of humor.

Many years ago, with a house for sale in a difficult real estate market, a friend suggested I buy a small plastic statue of Saint Joseph and bury him in my yard.

Not being Catholic nor particularly religious at all, I really wasn’t sure how putting a plastic saint in the dirt would help me sell my house but I was desperate.   I drove to the local religious book store, and sure enough, there on the shelf for $6.95 was a little green box that held St Joseph. 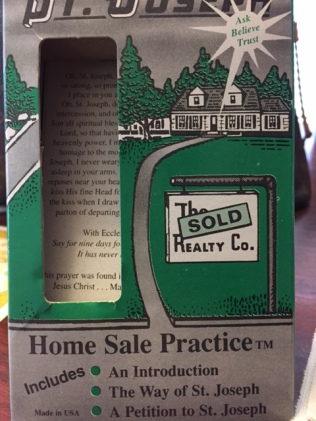 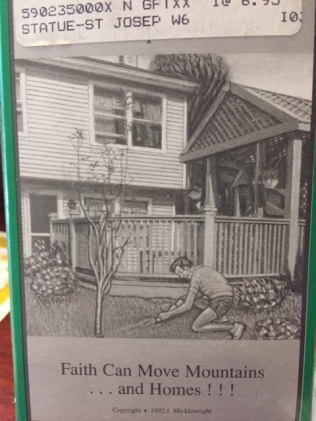 The box contained the plastic statue, a card with the prayer to St. Joseph and an introduction to the St. Joseph Home Sale Practice.

My skeptical side scoffed and decided someone somewhere was making a boatload of money, $6.95 at a time.

But, being a little superstitious, now that I had him, I buried him in the ground.

I dug him up, washed him off, kissed his tiny plastic head and put him back in his green box where he was packed to move to the next house.

With the next job transfer, I got him out, put him in the yard and our house in South Carolina sold to the first person who looked at it, for full listing price.

I dug him up, kissed his tiny plastic head and put him back in his green box to move on to the next house.

We were in the next house less than a year, and this time I didn’t bury St. Joseph.  The house did not sell while we had it on the market and was bought by the company where Corporate Dave worked as part of our transfer package.  We took a loss on that house.

That brings us to this home.

St Joseph and his little green box have lived in my entry hall console drawer for 17 years. I found him when I was cleaning as we were getting this house ready to go on the market.  I shrugged and thought ‘what could it hurt?’ so I kissed his tiny plastic head, said ‘thank you’ in advance and put him in a container of pansies sitting on my porch.   I didn’t bury him because we’re both getting older and I’m not sure either one of us wants to be in the ground. 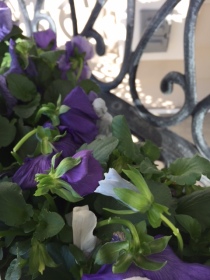 Coincidence?  Perhaps. But maybe, just maybe,  it’s more than that.

I’m going to take my St.Joseph, kiss his little plastic head and lovingly velcro him right next to my RV Patron Saint on Bella-BOWs dashboard.

I don’t think Eddie will mind sharing the honor.

This entry was posted in Posts and tagged Downsizing, Humor, RV. Bookmark the permalink.