On Passive Aggressive Canines (who read) 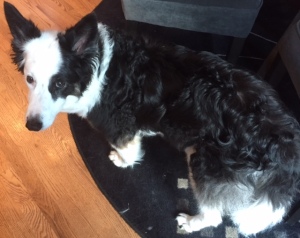 The look that says “Go ahead, leave, see what happens”

Tara has an attitude. Maybe it’s her age (12) or maybe her intelligence (she knows she is the smartest being in the house) but mostly I think she is just passive-aggressively bitchy.

When the schedule changes even a little,  she knows we’re going out or getting ready to travel, she plots her revenge.  This usually includes eating the mail or other things she manages to pilfer by methods known only to the great Houdini ( Hou-doggie?).  I’ve caught her standing on her hind legs checking out the table when I’ve had to come back inside because I’ve forgotten something.   She always has that guilty look on her face but I know she’ll be right back up there as soon as I close the door again.

I’m now getting ready for a trip.  The suitcases are out and the trip paperwork has been printed and on my desk inside a purple folder labeled “TRAVEL”.   Last night because we needed to run an errand, I fed the dogs early, moved things off the kitchen table, shut the bedroom door, and pushed in the office desk chairs

We were gone less than an hour.   When we got home I discovered my purple travel folder had been removed from my desk and torn apart, with half of it missing ( eaten).  The paperwork had been removed and left on the desk.  She just ate the folder marked “TRAVEL”.

It is now completely clear to me that the dog can read.

She ignored me when I asked, “who ate my folder?”.  Her only acknowledgment was to shift her eyes to look at Dallas as if she could shift the blame.   I may not be as smart as a Border Collie but I do know that Dallas isn’t the paper eating canine in the house.   I’m sure this will be confirmed when Tara poops purple.

On the way to bed last night, I caught her with her head in my suitcase.  I’ll have to remember to close it or I’ll get to Las Vegas with headbands that began as underwear and shorts that began as pants.

Because it is obvious that she can read, I think I’ll try putting a note in there that says “Please do not eat my stuff”.

I fully expect a written reply.