Yesterday, after seeing yet another argument between Facebook friends over politics , I decided I was going to take a Facebook break.    I had hit the boiling over point in my bullshit reservoir and couldn’t take one more argument.

This morning, I decided instead to try to *be the change I want to see* so I came up with Tussle Free Tuesday and used an app on my phone to create the meme.   Just one day to take a short break from the pounding negativity, arguments, and nastiness that make up our daily lives in this contentious political season. 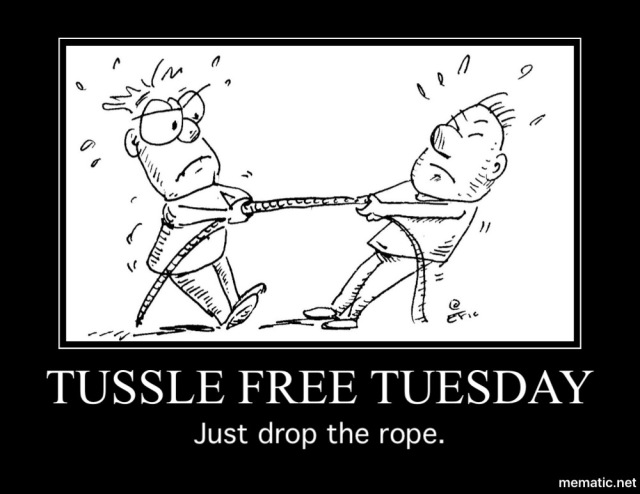 One argument free day isn’t going to change a mind.  It isn’t going to make or break a campaign to miss one day of getting a personal opinion or point out there.

What it will do is give us all a chance to get one breath of positive air.   To center ourselves and maybe remember that that friend on Facebook or in the neighborhood is someone we really like.   That the sum of their qualities is not diminished by their political opinion.

I’ve been in a mixed political marriage for 42 years.    We rarely agree on any issue or candidate, but his political opinion is only a very small part of him.  We don’t agree but we don’t threaten to “unfriend” each other either.

I try hard to respect the rights of others to have an opinion different than mine.   Do I feel strongly about my opinion?  You bet.    Do I feel the need to hammer it home on a post or conversation by someone with a different opinion?   No, I do not.    I will speak with my vote.

But for today, I hope we all just drop the rope.   Post a joke, a cute picture, a positive meme…..anything…….or nothing…..it doesn’t matter.   Just don’t argue, fuss or fight for one day.

Tussle Free Tuesday.  Just drop the rope.   You can pick it up again tomorrow if you really want to do that.

Maybe we can meet here again next week?