The RV Series- Day …what day is this? Decisions , Decisions

We’ve had a very nice (very hot) few days in Tucson.    We were scheduled to leave today for Newport Beach California but something we did yesterday has given us reason to delay one more day.

We spent some time at Freedom RV of Tucson.    If you remember we were supposed to stop last Thursday to have an issue looked at but as I was at critical mass we put that on hold.      Yesterday we headed over ,but not for service.

We went to look for a special attachment for OHD’s friend, the squeegee.  We ended up looking at motor homes.  (Imagine that being said in a whisper because I don’t want BBoW to hear us.)

Cliff notes reminder on back story:   We ordered one motor home(gasoline model), OHD changed his mind on what he wanted and we ended up buying another( diesel)  off the lot because we didn’t have time to order before leaving on this grand adventure.

BBoW is very comfortable.   Although not the model we originally wanted he/she has everything we need. He/she also has some growing pains.  Very frustrating growing pains.

Yesterday, sitting on the very hot asphalt lot at Freedom RV was…..

Where BBoW is a gherkin, BBBoW is a giant dill.    7 feet longer with a tag axle for more stability and more stuff (whaaa, whaaaaa, whaa, wha Charlie Browns teacher again, which is what I hear when someone talks about technical things).    All I know is that he is so beautiful inside he took my breath away. 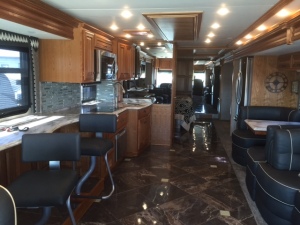 The salesman took us for a test drive and then let OHD drive to show him the difference the extra weight and the extra wheels made.

We left with figures on paper to see if doing something stupid makes sense to us.   I mean really, when you are doing a string of stupid things what is one more?

I could live in that big boy full-time ( and may have to if we actually break down and buy it).

So many things to think about and so little time to do it since we are on a semi-tight timeline.    California baby isn’t going to stay in there for ever.     This is not a decision we will make in haste, unlike the one we are sitting in.    It is a nice dream though.

When we got back to BBoW last night I felt a little guilty.    I think somehow he/she knew where we had been.     I gave him/her a little pat on the side and said “don’t worry little one”.     Sometimes we have to tell little white lies…….

We’re off early in the morning for our drive to California.