The RV Series-Still parked in Newport- The Newport Hillbillies

It dawned on me today that the fancy schmancy  people who drive past Back Bay Drive in their Bentley’s , Rolls and other ultra luxury vehicles  probably look down and see this sea of recreational vehicles and think “The Newport Hillbillies”   have invaded. 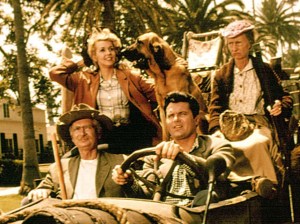 Truth be told, I would have thought the same thing at one time.

If you had asked me at age 40 or even 50 if I would ever be staying in an RV I would have laughed that snorty little snooty laugh.

Obviously I still had a lot to learn about life and change and never saying never.

As we prepare to wrap up this first trip out in the Big Box on Wheels I’m taking some time to reflect on the new things I’ve learned about myself and the world and some of the things I’ve reconfirmed.

Here they are, not necessarily in order of importance because my mind doesn’t work that way…

1.    The world is bigger than the bubble around me.   It doesn’t hurt to burst that bubble and venture out.

3.  Dave has multiple personalities.    Some of them make me want to pinch his head off but I don’t because I’m sure my multiplicity makes him nuts too.

4.  It is amazing how much crap one family can stuff in a small RV.    I’ve made a list of things I must buy for the next trip.  These include (but are not limited to)  a fire pit, a golf cart, several tents, a blow-up hot tub and more privacy fence.

6.  I can live without many of the things I thought I needed. ( Do not quote me on that yet and that does not include a blow up hot tub)

7.  Did I mention the shitty people?  Right…I did.    Well they are worth another mention.   Rude shitty self-centered people who don’t respect the space of others should be sent to an island where they can try to out rude each other until they die.

9. Things that make noise (like the giant wooden whirligig two streets behind us that clickity clacks all damn day) should be outlawed in close spaces.   Either that or I should be allowed to carry a flame thrower, a rocket launcher or a bazooka.

11.  People  who own little dogs that yip and think that screaming at them( louder than the dog is yipping)  to stop works should be forced to wear ear phones that play their own screams on a loop at top volume.

We leave this coming Thursday for the trip home.   We’re looking at several routes home and haven’t decided yet which we’ll take.   It is really too bad that there aren’t customized maps for the Travel Dave’s and High Strung Kathy’s of the world.  Those would be great.    I could keep my eyes open and he would be exactly on schedule.

Maybe I’ll work on that customization before the next trip but in the next few days I think I’ll stand on the road and wave to the cars like Granny did in the Beverly Hillbillies.   Maybe one of them will roll down their window and shout “Ya’ll come back now ya hear?”(More likely they will try to run over me…)