The RV Series-The Trip in Reverse and A WHOLE NEW DAVE!

We wanted to leave at 10 but didn’t pull out of the space until 10:30.     Then it was deja vu from day one of the trip.   As we drove 15 feet down the RV park road we once again had some airing up and electrical issues.     We pulled over, called the manufacturer and they walked us through resetting the whosiwhatsit system so we could drive.    We still have no 12 volt plugs so we’re driving without GPS but hey that is an adventure…..right?

Getting out of the Newport and Orange County area was a bit stressful since traffic was bumper to bumper and apparently BBoW was wearing an invisibility cloak because people kept cutting in front and running up the right side.     We finally got out of the bumper to bumper but traffic remained heavy.

Then we drove into hell.

The temperature kept climbing and as we reached Barstow California it was 111 degrees.   We stopped at a rest stop and I hated to get the poor dogs out of the RV.   They didn’t seem to mind as much as I did though.

It was like the mother of all hot flashes for me.  I thought I might spontaneously combust and start a fire.

But, right about this time a new Dave showed up.   I Can Still Surprise You Dave ( and the closely related  Nice Dave) made a suggestion to change our route and drive into Las Vegas for a night or two.    Now, what you need to know is that Dave doesn’t care for Vegas but he knows I love it.   I made some calls, secured a dog friendly suite at our regular hotel and we headed north. 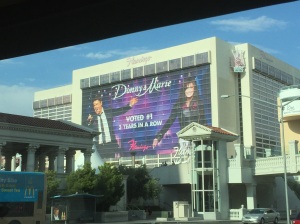 We parked BBoW behind the hotel, packed some things for ourselves and the dogs, unhooked the jeep and headed for valet parking.

Getting the dogs in was not quite that easy.   I think I’ve mentioned before that Jock doesn’t like walking on tile or wood or really any floor that isn’t carpeted.   We ended up using his bed as a throw rug and carrying him.   The elevator freaked him out.  Meanwhile Tarra was checking in like she was a resident.      In hindsight,not such a great idea where Jock is concerned.

In fact, the poor dog is so nervous that he had a diarrhea problem in the room.  I guess he thinks this is a shitty place…..

Today is all the Daves’ birthday.  He (and the rest of him)  is down getting a massage which Cynical Kathy thinks may have been part of the reason he suggested the stop in Vegas.    But, he deserves a massage and whatever other good things come his way.   (Happy birthday honey, the redhead and all her personalities love you .)

We’ll leave early in the morning (insert Travel Dave’s voice saying “4 AM!!!”) to try to get some miles in before the thermometer climbs.