Chester Chipmunk and the Lost Nuts- A Backyard Fable 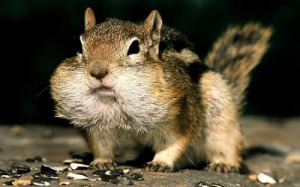 Chester Chipmunk loved nuts and seeds! He spent each day gathering and storing any that he could find.
He would fill up his little cheeks to overflowing and then go back to his burrow to store them.

One hot summer day he entered his burrow to add to the stockpile and all he saw were a few little grains of birdseed. Someone had stolen Chester’s nuts!

Chester was frantic. He had spent every day working on his food storage and now it was all gone. What was he going to eat?

Chester ran through his burrow to see if he could find any clues. He ran so fast that he almost tripped over his brother Charlie who was laying right in the middle of the burrow road.

“Charlie! Get up and help me find my nuts! Someone stole all my nuts!”

It was then that Chester noticed Charlie seemed fatter than he had yesterday and he had the telltale smell of nuts on his breath and a tiny seed crumb on his whisker.

“Charlie, you ate my nuts?”

“What am I going to do now? I’ve lost everything!” wailed Chester.

Chester went back to his food storage area and cried. He didn’t know what to do. All he owned in the world was gone. He spent the afternoon in the dark, depressed and alone.

That night he had a dream. He dreamed it was winter and he was cold and hungry. When he woke up the next morning he knew what he had to do.

He had to get back to work. Chester met the morning light with new determination. He had done it once, he could do it again. He gathered and gathered, stored and stored and within weeks he had built up another stockpile. This time he made sure it was well hidden from his brother Charlie.

The moral of the story:  Sometimes life doesn’t go as planned. We can give up and give in or we can get back to work and do what is needed. Hard work and determination is what counts.

This entry was posted in Fables. Bookmark the permalink.