Three Days in Vegas-Part One 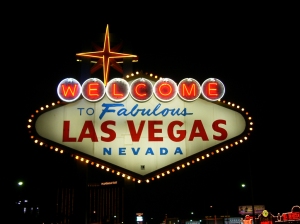 The following is a true story.  The names have been changed to protect the …well…the incredibly strange and mostly stupid.

Thursday August 20th I was booked on the 7 am direct flight to Las Vegas to spend three days of blissful alone time.

Check in and security were uneventful and I reached the gate with time to sit and observe the sights and sounds around me.

At this point I started putting positive thoughts out to the universe that I’d get an exit row aisle seat and that the person sitting in the middle seat would be tiny and quiet.

I did get an exit row aisle and the window was taken by a tall man wearing headphones.  So far so good.

The middle seat stayed empty until the last two passengers got on the plane.   Two young (early 20’s) women headed up the aisle and because there were only middle seats available began asking everyone they passed to move so they could sit together.    Nobody wanted to give up their aisle or window to sit in a middle seat for 5 hours and 40 minutes.

So, the middle seat next to me and a middle seat in the exit row opposite were taken by these young women.

Whiney McWhinerson sat next to me and spent the first half hour upset and crying that she couldn’t sit with her friend.

Leaning over me to see her friend and in that valley girl type voice loudly whining “But I wanna sit with youuuuuuuu.  This isn’t fairrrrrrrr.   How did this happpennnnnn?   I wannna sittttt with youuuuuuu”

I bit my tongue to keep from telling her how it happened.

( Southwest, open seating, buy early bird or upgrade to Business Select.  If you don’t do that and don’t check in exactly 24 hours ahead of time, you are screwed on boarding position)

I bit my tongue to keep from asking her if she was really  just a very large three year old.

Finally, a few minutes after take off and resigned to having to sit where she was, she quieted down.

I breathed a sigh of relief and settled in to watch a movie on my iPad.

Behind me was a row of young people. Across the aisle from them were their friends. All had either started drinking in the airport or continued from the night before.

Behind and  on the opposite  aisle was Drunky McDrunkerson.   He and his best bud  Vinny Vulgarity (right behind me)  began talking ( yelling) to each other.

I’m pretty sure  Vinny’s nickname for Drunky is  “f**ker”  because he said “Hey f**ker” every two minutes for the entire flight.

I turned up my iPad volume to “burst your drums” level and tried to finish watching my movie.  Though I seriously considered it,  I managed not to get arrested for punching another passenger in the mouth.

Finally after what seemed like an eternity in tiny tube hell, there was a good landing and a nice ride to the hotel.   I got checked in, dropped my bags in the room and headed down to the casino to play a little bit.