It is that time of year again.

It gets dark earlier and stays dark longer.   The days are gray , the sun struggles to shine.

My body tells me it just wants to eat and sleep.

This would be great if I were a bear.

I don’t have the luxury of hibernation.   I have to get up every morning and go to work.

SAD or Seasonal Affective Disorder most often starts in October or November and ends in March or April .  In my first draft I included a long and bo-ring explanation of SAD but who wants to read that?    I’m pretty everyone knows how to google.

Right now some of you are saying  “well this isn’t going to be funny, why the heck am I still reading?”.

I dunno but try to hang in for a minute unless you also have SAD  and your ability to concentrate ended in paragraph two.

I don’t have all those listed symptoms but I do have the following:

So the fight begins.  I’m stepping up the Vitamin D and getting out the light box.  I’m reloading my Dunkin Donuts prepaid card so I can drive through twice a day if necessary.

As my main symptom seems to be increased irritability,  I will apologize in advance to anyone whose head I bite off in the coming months.

Remember if we run into each other on the street,  it is best to approach slowly and offer the bear a donut.   This will put her in a good mood and give her a 30 second focus.

Then turn and run like hell before she finishes eating . 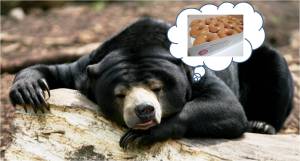