The Grump Who Grappled New Years 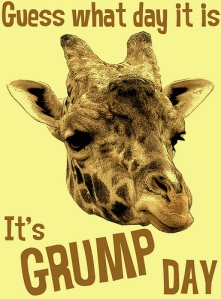 I managed to get through the whole season and hold the Grinch at bay.

The son of a bitch peered through the windows a couple of times.  Tried to sneak in the door once when I grabbed a UPS package off the front porch but I slammed it before he could get in only to discover it wasn’t the Grinch but the next door naver.

The end of the year is my busy time at work.  I have to shuffle papers and find receipts and spend a crap ton of time on Quickbooks getting all the business stuff ready for the accountant, all of which makes me extremely grouchy.

I become The Grump.

It is too bad that Dr. Seuss is dead because How The Grump Grappled the New Year would make a spectacular book (if I do say so myself and of course, I do).

Now please don’t ask why.  No one quite knows the reason!

It could be her head wasn’t screwed on just right.

It could be perhaps, that her shoes were too tight.

But I think that the most likely reason of all,

May have been that she hadn’t entered receipts since the fall.

Just imagine, the illustrations…  There would be one of me with a giraffe neck and freakishly short arms that don’t reach the filing drawers or the adding machine keys!

Another of me struggling under the weight of a bankers box full of receipts while the accountant looks down his long nose and mutters “tsk, tsk!”

Sigh.   I hope everyone has a Happy New Year.    I’ll just be over here in the corner entering receipts.

I’ll leave you with this:

“Maybe”, the grump thought  “I shouldn’t be such a bore”

And what happened then?  Well in Accountingville they say

that the Grumps short arms grew three inches that day.

And the minute her arms didn’t feel quite so short, she grabbed

some Champagne ( off the high shelf) and drank a whole quart.