The Apple IIe of Emotional Processors

The past few weeks have been emotionally draining. It’s been one month since I lost the dog of my heart.  Then two weeks after Jock died so did my hope for … well … lets just say it’s been an upsetting couple of weeks and leave it at that.

I googled “slow processor” and had to laugh because it pulled up computer comparisons.

I guess if we’re going to use that analogy, I would be an Apple IIe.

So, if I’m an old Apple IIe it is going to take me much longer to process my emotions than some emotional megawiz.  I tried doing the math in my head, a million, a billion, divided by, carry the one…….eh…..I decided to use “much longer”.  You get the picture, my emotions surface at a speed that can be compared to getting AOL email using dial-up. Remember?  It took forever!

When upsetting things happen, I go numb.   I’m on auto pilot,computerized, getting things done that need to be done.   At some point the numb  will crack a little and feelings will fall out.  This is usually messy since the feelings don’t fall out in a nice organized manner;  they tumble out like last years Christmas lights, all tangled and twisted.

This always results in ugly cry face which is exactly what happened a few days ago.

While on emotional auto pilot, I ordered a very nice wooden box to hold Jocks ashes. The box includes a Border Collie figurine on the top which happens to look very much like him. It was delivered and as I lifted it from the bubble wrap I felt and heard the numb crack (though looking back the sound may have been the bubble wrap). 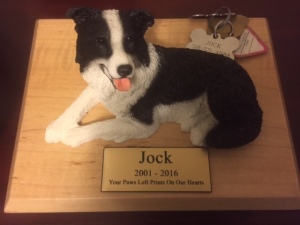 Then there was that old AOL voice saying “You’ve got feelings!”.   The tears rose and splashed down my cheeks.

The other two dogs circled trying to figure out why I was making those noises.

I cried long enough to insure I had left over cry face for the rest of the night.   You know the one; red nose, puffy eyes, splotchy skin, looks a little like the flu minus the contagious part.

Not only do I process slowly, but a little like the memory capacity on the Apple IIe, there is limit on how much I can feel at one time.   I needed to put that sadness away, so in keeping with the computer analogy, I stored it on a floppy disk marked “numb” and shoved it in one of those plastic disk storage boxes somewhere in my brain.

I’m sure emotional tech support would tell me I need some work  but I think I’m too old to upgrade at this point.   Processing my feelings at Mac speed would probably overwhelm me and I don’t want to go through the rest of my life with chronic ugly cry face or risk getting that dreaded fatal error message on my monitor.

I’ll reboot in a few days and feel a little more.   In the meantime, I’ll just be over here playing the original version of “Where in the world is Carmen Sandiego”.

2 Responses to The Apple IIe of Emotional Processors