A little over three weeks ago, we dropped Bella Box on Wheels off at the Newmar factory in Nappanee Indiana for some warranty work and a little plastic surgery to fix an injury she received when she first came to live with us.

We loaded the jeep with everything we needed for a few weeks ( and some things we didn’t need but couldn’t leave in the coach) then headed to Ohio to spend that time with our oldest son and family.    I’m sure they wondered just how long we would be staying when they saw us unloading the “stuff.”

We spent the next 23 days living in a house again.   Dallas the Dog loved being able to lay by the front door and look out the window at the neighborhood.  He learned to spot both my sons and my daughter in laws car and alert us when they pulled into the driveway. He learned that sometimes twelve and fourteen-year-olds leave tasty treats within reach and that the nice blonde lady is a soft touch when you beg for people food.  He left copious amounts of dog hair all over the beautiful pet free home and even wormed his way into the heart of the man who doesn’t really care for dogs. 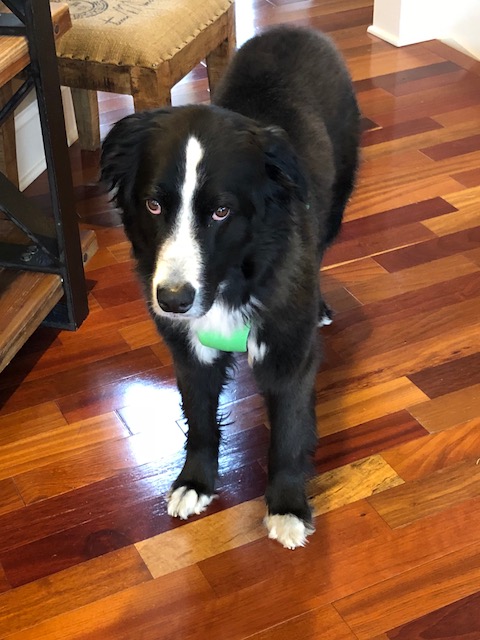 Dallas seemed to love being in a house again. I have to admit, I enjoyed it too, even though I spent the first few days learning that Alexa controls the lights, locks and many other things in the house.  I confused her by using the light switches.  It took me days to remember that the kitchen faucet has a touch sensor.  That faucet and I had a love/hate relationship (much like the auto-flush toilet in the Albany Airport).  It’s a little bit hilarious to live in a Smart Home when you aren’t quite as smart as the house.  I’m pretty sure I heard Alexa quietly ask my daughter in law when “those tech dummies” would be leaving.

Yesterday, Driving Dave brought Bella home and got her set up at a nearby campground where we’ll spend the next few weeks.  The kids and I loaded all of our things into my daughter in laws Yukon, and she dropped Dallas and me off at the campground.

Poor Dallas seems a little bit depressed about the loss of his sunny spot by the front door, and I spent last night trying to turn my kitchen faucet on by touching it and asking Alexa to turn the lights off and on.  Dammit!

Bella might not be a Smart Home, but she does look good.  All her internal ills are fixed, and her plastic surgery was a big success.   It’s nice to be sitting back on these wheels and know that we can head wherever, whenever.

A trip to New York is in our future before we head back across the country sometime in late June, putting us back in Las Vegas sometime in July.   Yes, I know…. Las Vegas in July is Hell’s training ground, but it’s home, and I’ll be happy to be there.

For the next few weeks, we’ll spend our time watching both of our grandsons’ baseball games, enjoying the cool spring weather and making a few short trips around the area.

This entry was posted in The RV Series and tagged dogs, family, Humor, RV, RV living, Travel. Bookmark the permalink.