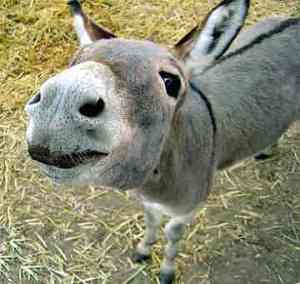 Delbert Donkey was a pessimistic ass.

If the day was sunny, he’d hee-haw that it would surely rain.

One day the rains came and flooded out the barnyard.   Delbert climbed high on some hay bales in the barn and smugly thought to himself “Told them it was going to rain”

As he sat watching the water recede he looked out the window and saw a rainbow.   For a moment he thought “how pretty” but then he said aloud “won’t last”.

A little voice from under the hay said “Maybe not but isn’t it beautiful right now?”.

Delbert looked and saw a little gray mouse sitting beside him.   He said to the mouse “ok, I admit it, it is beautiful right now.   So beautiful I think I’ll go outside for a better look”

Delbert was smiling as he optimistically strutted out the barn door to have a better look at the rainbow.

Just then, a crack of thunder and a bolt of lighting hit.  Delbert was done for.   His last words were “Fucking rainbow!”

Moral:   Not every rainbow leads to a pot of gold.   Sometimes it’s just a sign to kiss your ass goodbye.

This entry was posted in Cynical Adult Versions of the Fables. Bookmark the permalink.