The Story of Jock-The Red Thread

After our Chesapeake Bay Retriever died,  we decided that a Border Collie would be our next dog. We knew we wanted to adopt and knew we needed an older dog with less drive and energy than a young BC would have.

Glen Highland Farm Sweet Border Collie Rescue had taken Jock and Tara in at the beginning of the year when their owner surrendered them due to illness.   He originally adopted them from Glen Highland when Jock was two and Tara just ten months, so these dogs had been together since the beginning and needed to stay together.

We made the three-hour trip on that blustery day in March to see a few dogs featured on their adoption website, but I didn’t feel a bond with any of them.   The rescue director then brought out Jock and Tara.  The feelings were immediate and mutual.    Tara leaned against my leg and gave me one of her special hugs and Jock just looked straight into my eyes.   I remember saying out loud at that moment “this boy is an old soul” and the rescue director agreed.  I think she knew at that point that we were the right people for these dogs.

We left that day with two beautiful black and white dogs, and for the next six years, our lives were enriched by their love, their intelligence, and their antics. 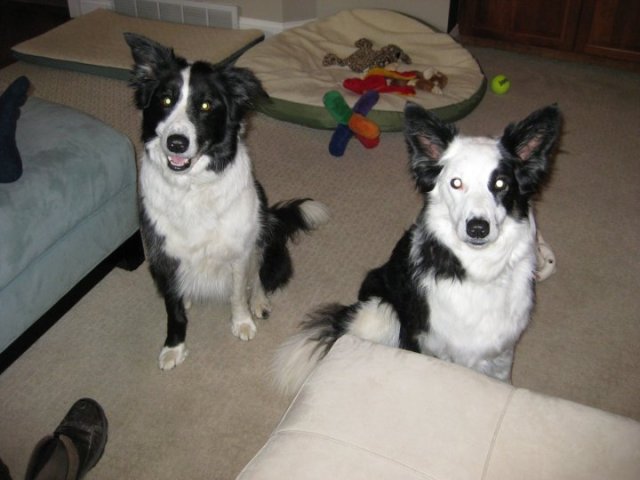 My bond with both of them grew daily, but my bond with Jock was something I’d never experienced with any other dog.    I am a dog person, I always have been, and I’ve never met a dog I didn’t like.   But this boy, this old soul, was special.

There is a Chinese proverb that says “An invisible red thread connects those who are destined to meet, regardless of time, place or circumstance. The thread may stretch or tangle, but it will never break”.

I believe there was a red thread between this dog and I.   It stretched through his first nine years of life, but it didn’t break.   We found each other when the time was right for both of us.

Though I knew our time with these two great dogs would be shorter than we’d like, I wasn’t ready to say goodbye to my sweet boy.   But I had made the promise to both of them that I would love and care for them, and when it came time to let them go, I’d be there to do the last best thing for them.

Yesterday, I did the last best thing for the dog of my heart.   He had spent two days unable to walk and in obvious distress.  His eyes told me that it was time to keep my promise.   I held him as he took his last breath and then sobbed into his soft fur.

Today I take comfort in the thought of that red thread.   I believe that the thread is there still and in another time, another place, we will come together again.

This entry was posted in Jock the Dog, Posts and tagged dogs, loss of a pet, old dog. Bookmark the permalink.

3 Responses to The Story of Jock-The Red Thread